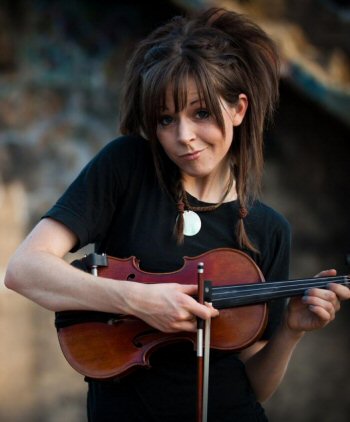 If you haven't heard of violinist Lindsey Stirling you are not hanging out on Youtube or social networks enough. With 220 million Youtube hits, nearly 1.5 million subscribers, a number one album on the Billboard Classical and Dance charts and a sold out world tour, Lindsey Stirling is the most successful independent classical crossover artist of all time... all in the space of a year. CCUK caught up with Lindsey on the UK leg of her European tour; five hours before she'd be performing to a sell-out crowd in London.

You're a violinist, dancer, director, producer, singer, editor... how did you acquire all of these skills?
Oh gosh! Erm, well the violin, thankfully, I had lessons as a kid! I was classically trained since I was six. All the other stuff I mostly taught myself. I just started producing and making little music videos and editing them when I was in high school with my friends. I got some editing software and I would mess around with it. I partially went to film school for about a year before I decided I didn't want to do that... as for the dancing I just watched a lot of Youtube videos - I'm a very self-taught dancer! I've always loved it so I decided I was just going to teach myself.

As a successful independent artist, what advice would you give to other indie artists out there?
I would say, be ready to work really, really hard! I'd also say don't compromise what you love for what you think is popular. When I originally was trying to be an artist, a lot of people, especially record labels, kept telling me "no, no, no". I got sick of waiting to hear someone tell me "yes" - sick of waiting around for someone to tell me that what I do is good enough - so I started making Youtube videos. So whether you make Youtube videos, or whether you just do shows or whatever else you do: be ready to work hard and stay true to what you love, rather than doing what everybody else thinks is marketable.

Do record companies "over think" marketing strategies?
I think they are not willing to do it patiently and so that's why they have to, as you say, "over think" it. The way an independent artist has to do it is grow quite slowly and then once you grow slowly, all the sudden, it starts to roll fast - and faster and faster and faster, and then things take off. But you have to start it very authentically whereas record labels have to "buy" fans. They have to buy space on the big TV networks, they have to buy their way into the hearts of the people they are marketing to, rather than just authentically finding it through time and people finding it themselves. Those true fans that find it themselves, from the beginning, those are the kind of fans that record labels can't buy. That's kind of what gives me my life as a musician; these people authentically found my music and they love it because they found it, not because somebody told them it was great.

How do you classify your music? If you can?
I'm not sure. I've never been quite sure how to classify my own music. I don't really think it fits into a niche. It's in the electronic category on iTunes - that's what I decided to classify it in but the thing that I love about my music, for me, is that it entails all of my favourite things. It entails dance, it entails elements of electronic, it has classical roots to it, some of our beats are rock driven, it also has a very Celtic vibe. It's all my favourite things thrown into one. Choosing a genre for me was hard! To me, this is everything! 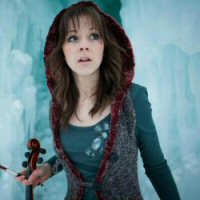 Can you explain the process between forming an idea to it becoming a final song/video?
It depends. Sometimes I get an idea for a video first, because I do both ends - the music and the video. I wrote Shadows and I couldn't think of what to name it, and then all the sudden I came up with this great idea for a music video. I was like 'oh my gosh, that music video has to be "Shadows" and so that's what I have to name the song.' I thought of the video concept before I had even named the song. This was before the song was even finished and that's kind of what inspired me to finish it the way I did. Other times I come up with the song first and that inspires the video. I think 'what does this feel like?' Crystallize the song came first and I kept trying to envision, when I closed my eyes, what do I see when I hear this music? And what do I want my audience to see? And so it just depends. This is why I love the fact that I'm in charge of both because I go at it from the film side first or the music side first.

I've been wondering what thought process made you put Africa and Rihanna together...?
I had the opportunity provided! A tourist company contacted me with 'hey, if you do a video in Kenya, we'll fund your experience - just give us a shout out at the end'. I was like, er, YES! With the opportunity to go to Kenya I was thinking 'what song do I want to do?' and Rihanna had just come out with We Found Love. I had already recorded the song before we went out there and I told the producer that I wanted it to sound African as I was doing the video in Africa. But I decided to change the words of the song after I had been to Kenya because it was such a beautiful place; I can't call this place hopeless; this is an amazing place; the people aren't hopeless at all! So that's why my version is 'we found love in a whole new place' instead of 'we found love in a hopeless place'.

What was your favourite video to shoot?
I really enjoyed doing Elements! I got to go and get all these different costumes and put them together. I knew the concept before I started - for the video to represent the four elements - so I had to figure out how to do this.  I just got to be so creative: how do I want to show fire? how do I want to represent that? I made the set from things in a home department store and I was finding ways that I could light things on fire safely, you know? It was just really fun, it was like a giant science experiment mixed with video and music.  It was a big challenge which is why I think I was so proud of it when it was done. 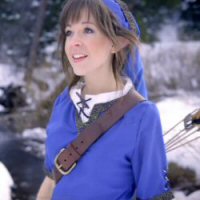 Do you have any favourite video games?
I always loved Mario growing up! Mario Kart - I was A-MAZ-ING at it! [laughs]  I've played just a little bit of Zelda.  I've never played much of the newer games just because I'm so busy doing videos and music, but... the old skool stuff? like Mario? - that's what I like!  Even though I only played Zelda a little bit as a kid I still love the music and I love playing dress up!  Video games have such fun costumes to go with them!

Do you have any plans on releasing a DVD of your music videos?
Yes! We're working on that right now; we're trying to work through all the details, logistics involved, etc.   We've just designed the cover, actually, so hopefully in the next month of two we will get something out! It will be available on Blu-Ray and DVD, all the HD stuff, the works!

Do you have a new album planned?
Yes, but I haven't even started working on it though because I've been on tour ever since my first album got released! I've just toured, toured, toured!  At the end of the summer I'm gonna hit the studio hardcore and then I want to drop the album right at the beginning of 2014; that's my plan!

How are you finding touring? Your schedule is kind of crazy!
It is! It is very crazy! It's really fun though because I love the people I'm with!  Before I started touring I was doing a lot of individual shows and I was thinking 'I kind of hate this whole traveling thing' because I was all by myself and I would jump on planes and off planes and be in hotel rooms all alone. I was like: 'this stinks!'  But then I started touring: I've got a band, and one of my best friends is on the road with me doing merchandise.  I love my crew, our opener is great, the Vibrant Sound - he is so much fun and we just have so much fun together.  My band are like my brothers now.  I have a blast with them and now I absolutely love it.  I just love everybody on the road so much!

Full European and US Tour schedule